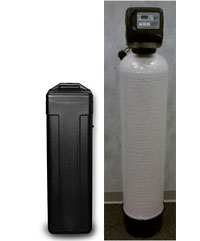 Having hard water means that you have an excess of calcium and magnesium. Signs usually include white scale buildup around your faucets, in your shower, sinks and bathtub.

Reasons To Soften Your Hard Water:

While hard water with excess calcium and magnesium has no known adverse health effects, it can still be a pain when it comes to cleanliness. The white scale buildup caused by hard water is difficult to clean and remove, leaving your dishes, shower, faucets and sinks looking unclean. Additionally, hard water can dull hair.

How A Water Softener System Works:

A water softener system consists of a tank filled with resin beads, distributor tube, control valve, and a brine (salt) tank. As the hard water passes through the water softener tank, the resin beads remove the hardness. The system will regenerate on its own every 4-6 days. This regeneration process consists of salt brine being drawn from the brine tank and into the water softener tank. The salt removes the hardness attached to the resin and flushes it down the drain. The system becomes recharged and ready to remove more hardness.

The only maintenance required on a water softener system is making sure there is enough salt in the brine tank. Salt will most likely need to be added to the brine tank about every 3-4 months.