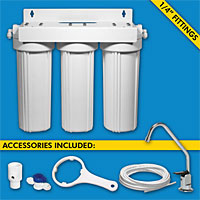 Having clean and purified drinking water will not only be tastier, but will prevent any potential health issues that are caused by water contaminants including lead, chlorine, rust and other chemicals.

Dangers Of Lead In Drinking Water: According to the EPA, potential health issues for children include delays in mental and physical development, slight deficits in attention span and learning abilities. Health issues for adults include a possibility for increases in blood pressure and adults who drink lead contaminated water over a long period of time could develop kidney problems.

Dangers Of Chlorine In Drinking Water: While chlorine is often used to as a disinfectant to protect water from disease-causing organisms, excess or high levels of chlorine in drinking water can cause irritation of the eyes, nose and throat and sometimes stomach discomfort.

Dangers Of Rust In Drinking Water: Rust, which is often caused by deteriorating iron piping, is considered an aesthetic contaminant because it more likely to harm your laundry with stains, than your health from ingestion. It also has an unappealing taste.

How A Drinking Water System Works: The drinking water purification system that we install is an under-the-sink system. It comes with a separate faucet for the kitchen sink and has three filters that treat the water. This system is rated for the removal of sediment, rust, chlorine, cysts, lead and chemicals.

Drinking Water System Maintenance: The great thing about this particular drinking water system is that the filters only need to be replaced once a year.

If your drinking water shows these warning signs including blue-green stains, red-orange stains, brown-black stains, white scale buildup or has a rotten egg odor, then it’s strongly advised that you have a water purification system installed.